A good unit test examines a specific scenario using the required minimal input and then verifies that the system has reached a specific state.

This could prove quite a challenge when the unit of work requires complex input, or if the resulting state is difficult to isolate from the rest of the system.

When faced with a complex problem domain, developers tend to over simplify the scenario tested. The problem is that over simplification causes unit tests to lack any meaning while making them increasingly fragile, breaking with any trivial change. From there on it’s a slippery slope until eventually the developer stops writing unit tests due to frustration with the state of these simple yet unmaintainable tests.

Another solution is to write acceptance/scenario/integration tests that execute a big chunk of the system. While those tests are needed in every project, they should be used sparsely and only for main requirements/execution paths. The reason is that they usually run longer and are easily effected by external factors – a scenario test can fail even when the code works perfectly. Relaying heavily on those kinds of tests leads to long running sessions, and when these tests fail it’s difficult to quickly find the root cause of that failure. Instead of quickly fixing the problem, the developer must fire up his debugger and try to find the bug.

A developer trying to create an existing domain object may find out that many domain objects are not created by code but constructed from external services, run time variables and/or data repositories, and re-creating such objects requires an effort. I’ve seen some teams create serialization solutions in order to save and load the right instance for each test, and in fact many times unit testing efforts are postponed (sometimes indefinitely) until such a tool is created.

For this article I’ve used a ray tracing application adapted from a blog post by Luke Hoban. 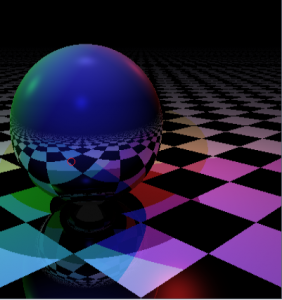 Writing unit tests for this application is hard as there are many factors that affect every single pixel color: camera angle, object(s) placements, material types, direction and color of lights – you name it.

When facing this amount of data it’s hard not to be intimidated and choose to render the whole scene. But running the entire application would take a long time and testing correctness would be harder still.

Another problem with testing the whole scene is knowing whether the test has passed. One option is to compare the result with a previously rendered image. The problem with this option is that it could lead to a test failure for every single pixel change, and we won’t be able to pinpoint the reason that the test failed (image A is not exactly the same as Image B is just not good enough and would require quite a lot of work to determine if a bug actually exists and what caused it).

Ideally we’d want to be able to check several key pixels on that image to make sure that they were rendered successfully.

The logic I’m interested in resides in the TraceRay method which takes a Ray object and a Scene and calculates the color of a single pixel: